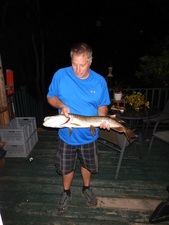 July, 2015 - From Scott and LeighAnn Keller, proud new owners of a Smokercraft 14' Big Fish with 25 HP Evinrude E-Tec, and nice galvanized trailer.  The Kellers live in Bath, ON.  This is a note received from LeighAnn:  "PS - I have attached a pic of the Pike he caught last weekend on Beaver Lake.  Nice one eh!!?"
﻿August 30, 2014 - A letter from campers on nearby Singleton Lake:﻿
Just received this email from a customer - so nice that people take the time to thank someone for going out of their way to help a stranger. The lady that helped them was Lynne Russell, who is the mom of Kate Eaton Russell, the beautiful model that used to work for us, and still comes back occasionally.   Lynne started working for us when Kate had to go to Toronto to become a Ford Agency model!
Here is the thank you note:
﻿On August 30, 2014, while boating near Gananoque Lake, we became stranded when our pontoon’s motor ran out of oil. We managed to get near a cottage where some young adults were cooking out and asked them if they had any 2-cycle oil. Although they didn’t, they brought a woman out of the cottage who said she could go and get some. She loaded up her 3 dogs in her boat, told us that she had to drop them off at one location, boat to another where she was parked to get the oil, and would come back to help us. True to her word, she came back with a jug of oil, along with a different larger dog with a very cool black patch on his face. We paid her for the oil and, while chatting about why she carried 2-cycle oil in her car, she mentioned that she worked at your Marina. Unfortunately, we didn’t get her name but were familiar with your Marina and wanted to say thanks again.

Please extend our sincerest thanks to her and a big thanks to your Marina for employing such kind and generous people. Like I said, we were already familiar with your Marina and will gladly recommend others to your shop. 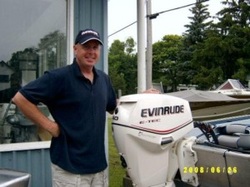 Thank you to Brad Moulton of Gananoque, ON for sending this email after one of his first outings with his new Evinrude E-Tec 40 HP

I wanted to share my E-tec experience with you. Last weekend we were in a pike derby. My friend's Mercury broke down. We already had three of us in my 16' Princecraft with the 40 hp E-tec as you know, and now we added the four of them and not one was less than 220lb. We calculated 7 people to a total wieght of 1460 lbs, plus all our gear!

As we headed down the lake putting, I said "hey, we should see if we can get her on plane". They all laughed, saying look at all of us, ha ha. So you can imagine, now I had to try it. Well, you'll never guess what? We actually got the boat on plane and I trimmed her up to optimum ride & speed. This was so crazy I couldn't believe my eyes, along with everyone else, so we had to go for a tour. Gotta love the power of BRP. 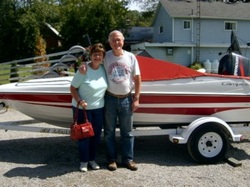 Well, after we stopped for a bite in Athens, we went home for a boat ride. It was a beautiful night and we had a lovely, leisurely ride around Graham Lake. There were several other boats on the lake and we could sense that they were all very envious! Or was it just our pride getting a little out of control? Anyway, it was very enjoyable. Thanks again, very much.

We're looking forward to receiving copies of those photos you snapped today. We have high speed so you don't have to worry about the size of the photos.

So many more testimonials, and so little time!!!  Hopefully, I will have time to add more, later! 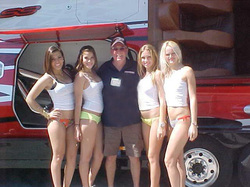 Dwight and "his girls" at the Miami Boat Show.  He wanted to bring them home.